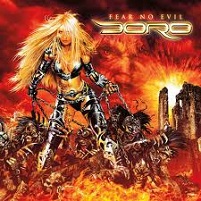 With 25 years in the business and God knows how many albums under her belt, the legendary Doro is always up to something. Whether it’s cutting the 2009 Wacken theme song

, doing some symphony work or hooking up with her various gal pals for a duet, Doro is anything but static. In spite of its glaring production flaws, Fear No Evil is another respectable album to add to her canon, full of the atypical songs

Vocally, Doro sounds great and that’s largely because she’s never put herself in the position to overextend her voice. Her raspy, punkish cat call still packs a lot of punch on otherwise punchless numbers like “Running From the Devil” and “Caught In A Battle” which forces the aforementioned production faux paux’s (read: drum machine) to rear its ugly head.

The centerpiece of the album is “Celebrate,” which features nine, count ‘em –nine of Doro’s friends, most notably Biff Byford (Saxon), Floor Jansen (of the now-defunct After Forever), Angela Gossow (Arch Enemy) and Liv Kristine (Leaves Eyes), to name a few. The song itself is what you’d expect: a call to arms celebrating Doro’s dedication to rock/metal, backed by a massive chorus from the above parties. Frankly, you can’t make out any of the voices, so the impact is lessened.

Former Nightwish siren Tarja Turunen joins Doro on “Walking With the Angels,” which is probably the best song here. Turunen weaves her earthly magic and combines nicely with Doro for a soft, radio-friendly ballad that will most likely be pushed to the metal masses.

It’s hard to say if there’s a real need for new Doro material, as the clamor for her Warlock and early 00’s work will no doubt be deafening in the live setting. Still, she keeps on popping ‘em out and still looks as good as ever at 45. Doro just can’t lose.