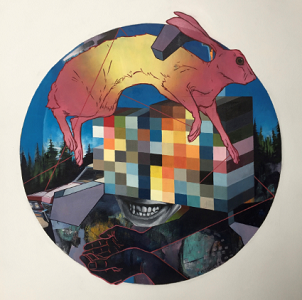 The Sword’s recent fall from stoner doom grace notwithstanding, the Austin-based crew did have said market cornered well before anyone else thought to modernize Sabbath for the hipster crowd. Whether you agree with their current musical direction or not, The Sword still holds plenty of sway in rock circles. After a rather hearty “blaze” session (figure it out) while listening to Pink Floyd’s “Time,” The Sword guitarist Kyle Shutt figured it was nigh time to make a “heavy” version of Dark Side of the Moon. The man rounded up some indie rock musicians and popped up the not-quite-good-as-it-should-be Doom Side of the Moon.

Frankly, the songs here aren’t really all that “doomed” up, with the exception of “Money,” which has always had the tenacity of a heavy song. Vocalist Alex Marrero (Brownout / Brown Sabbath) is certainly the man for David Gilmour’s job, displaying the soft, relatable feel the great Brit did upon the album’s release. Subsequent atmospheric cuts like “Breathe” and “Us and Them” largely maintain their initial focus, albeit with bigger guitars and a fatter production. Simply by sticking to the template of the originals, Shutt doesn’t cast any new light, although “Brain Damage” (a cut covered live by a host of bands) possesses the most persuasion.

Pink Floyd covers certainly aren’t in short supply, but full adaptations are not, which puts Doom Side of the Moon into a unique category. And, of course, let us not forget The Floyd’s wide-ranging influence on metal; from the illustrious atmospheric ploys of bands like Antimatter and Anathema, to the whatever post-mutation you can think of. Doom Side of the Moon doesn’t exactly shed a new light on Dark Side of the Moon let alone Pink Floyd. It comes across like more of an opportunity for Shutt and friends to satisfy their blazed-up musical fantasies.