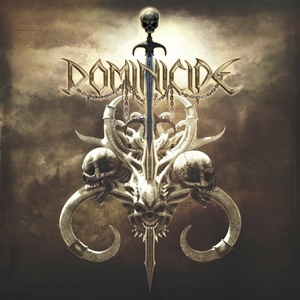 While scant background information seems to exist regarding the history of this five-piece outfit, Glasgow’s Dominicide push potent thrash with plenty of groove/melody elements on their six-song self-titled album. In a genre that occasionally rides on the coattails of the old school Bay Area mentors when it comes to second/third generation bands, these musicians prefer to mix things up from a variety of modern aspects on the sonic and execution angles – while also keeping the heart of energetic riffing and tempos on hand that epitomize thrash and its enduring appeal.

The band bounce between a staccato-laden mid-tempo groove and slightly faster, bashing assaults where the twin rhythms from Craig Law and Christoper Blair race to almost melodic death propensities (“Pent Up Rage” of note). Careful transitions become air-sucking vacuums to set the stage for the next double kick, blasting salvo or haunting sonic atmospheric addition from narrative clips to bells. The skilled construction from track to track proves Dominicide have as much affinity for Exodus and Metallica as they do say Revocation or Trivium- and when the band choose to lay into a more groove-oriented track like “Monstrosity”, it’s not commercially-driven, plus the monster jackhammer instrumental switch-up should please those into Machine Head as much as Sylosis. As a vocalist Sean Dougan probably gets comparisons to James Hetfield meets Phil Anselmo in terms of his sneering, drawn out nature to certain words/phrasing – amply backed up with supplementary gang vocals to encourage audience engagement with the choruses.

By normal time standards, Dominicide clocks in at a scant 28 minutes and change – but do not let this dissuade you from the intricacies and proper songwriting versatility on display. Incredible lead breaks (sweeps and arpeggios abound, but making sense for the context track to track), heightened anticipation for the next riff change, and a brilliant quick finish on “War Machine” ensure the band repeated airings in most thrash catalogs – for the young as well as the original guard.