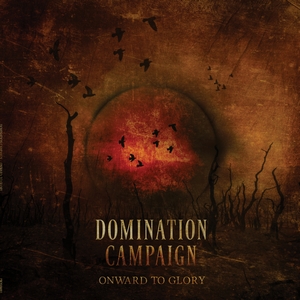 Originally intended as a solo effort for Psycroptic frontman Jason Peppiatt, Domination Campaign expanded its membership to include fellow Psycroptic drummer Joe Haley and thus Onward to Glory was written. Unlike Psycroptic, Domination Campaign is more straight-forward and groove-friendly, offering a bit of old school death metal in its sound. While not revolutionary, it’s good brutal fun to take in.

Though a two-man act, Domination Campaign has the heaviness and sonic punch of a full-fledged act. As already noted, the band is keen to employ plenty of warlike grooves (“The Sniper’s Gaze” was a wisely chosen early representative of this) as they thunder through the tracks. There’s a definite ‘90s feel to the whole thing, outside of the solid production job that is. The grooves always pop, countered by some switchups in tempo – often moving into faster territory to get the adrenaline pumping. While the tracks do seem to be eager to accomplish similar goals (tis death metal through and through after all), the shifts are appreciated in a track like “As Daylight Breaks,” which moves from plodding and crushing to groovy mid to blasts a-plenty with fervor, all in a scant 4-minutes. That’s the other real plus here, as the songs get right to the point – no extra, no flash, just straight-up vicious material.

Fans of raging, old school death metal as well as fans of Psycroptic will surely get some enjoyment out of Onward to Glory. Particularly those with a hankering for a good groove, as you’ll find more than your fill of them here.