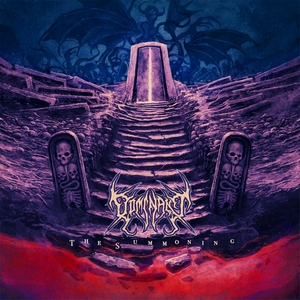 Death metal is often at its best when it manages to encompass all of the fury within, yet keep things with some sort of semblance of order. Frantic, off-the-rails death metal is fine from time to time, but the true masterstroke comes when you can merge the brutality with at least a little bit of melody. And while many bands run for the old school Swedish hills of the early ‘90s to accomplish this, thankfully we have bands like Dominant to channel the mid-to-late ‘90s death metal that soaked in both thundering heaviness, quasi-technical structures, and a healthy dose of memorability.

Hitting that sweet spot between revering some of the older ‘90s flavor, yet keeping a more modern assault, Dominant never sound dated nor copycat-like. Instead, they reach into the core of what makes death metal work from the start and run with it. There are some fast and gargantuan riffing to dole out the audial punishment as needed (see “Feast of Woe”) – but there is an equal portion of groove and melody that sink in from time to time. Some excellent and technically-impressive leads play their part in the mix, but truthfully, there isn’t one track here that lacks for catchy (yet still visceral) riffing. Be it a slower groove (“Vultures of the Void”), small dive into atmosphere (“The Purging Swarm”), or simply an all-out blast-beat driven assault (“Servants of Damnation”) – this an across the board effort that includes the guitars, drums, vocals, and yes, even bass. The short, 20-minute runtime is never at a loss for ideas, and the compact, 4-minute nature of the tracks give them the ability to get in and get out with maximum impact.

Much to enjoy for the death metal fan with Dominant’s The Summoning. It’s massively brutal, yet catchier than you’d be initially expect it to be. They have their finger on death metal’s pulse, and it should be interesting to see where they take it from here.