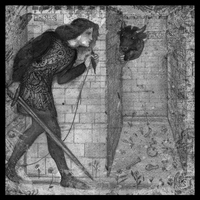 It’s always exciting to find a band that describes themselves as something different and can actually follow through with that claim (unlike a slurry of press sheets we go through at DR where everyone claims complete uniqueness). Anyways, Dolven is an Oregon-based band that claimed the interesting title “acoustic doom.” Such a thing seemed too good to be true, until it started playing.

Acoustic doom is seemingly a perfect fit for what Dolven have done with Navigating the Labyrinth. True to the title, the only time you’ll hear an electric guitar is when there’s a solo that sweeps in (such as Agalloch’s Don Anderson does on “Inhale”). Outside of those instances, everything is acoustic, yet it is somehow oppressively heavy. The weight of the riffs are filled with sorrow and darkness yet retain an ear for melody. The closest sonic comparison would be that of Obsequiae when they are doing the atmospheric, acoustic pieces. Dolven do also provide a similar experience to Obsequiae in that the music doesn’t seem to be “of this time,” rather something that takes you away to a faraway land of fantasy and castles. The vocals are also quite unique, mostly sung in a low, doomy, clean tone that escapes comparison. Only three of the songs have singing, but they add some more emotional heft to the album when present, and “Labyrinth” even drops in a black-ish cackle.

One might wonder if Dolven simply qualifies as neofolk, but there’s something distinctly doomy about it that avoids that comparison. Regardless of how you want to look at it, the best thing you can do with an album such as Navigating the Labyrinth is to hear it for yourself. It’s a unique approach to doom, full of magical and mysterious melodies that will take you on a trip from the ordinary. An album for quiet contemplation or when you just need an escape from the present.