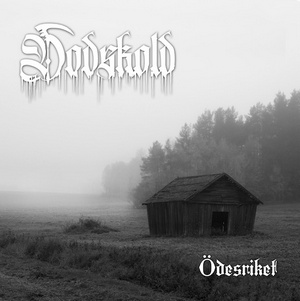 A new black metal act from Sweden with three members who go by the names T, M, and L (all of which have been established in the scene prior), Dodskold leave their first impression with Ödesriket. As the grim, foggy cover may imply, this is black metal that sticks to the darker side of things – playing that to that cvltish side but not exactly wanting to stick to the rulebook all the time.

On initial glance, Ödesriket carries all of the traditional black metal sounds that you’d expect. There’s some buzzy guitars and a cold/icy feeling to the music that is ripe with atmosphere (but not the blackgaze-y type). Instead, much like the fog on the cover, Dodskold carry a large feeling of grief and gloom. Since they don’t just blast away at all times, the mood is more calculating and dark overall, and it is enriched by melodies that bring about a haunting air to the music. “Misarens Triumf” is riddled with the feelings of isolation and despair, from the bleak melodies to the anguished rasps that make up the vocals (admittedly there are even a few sorrowed cleans too). As the band speeds up, the buzzing undercurrent flexes more muscle and gives the music a more urgent tone, but the bleak vibes never quite go away. “Jotunhedarna” has some speedier moments but retains a coat of despair and oppression. One additional piece that stands out with the sound is that of a bass. Present in the sound, even with the suitably murky tones, and it’s a great addition (which begs the question of why we don’t hear it more in other likeminded acts).

Ödesriket sure satisfy black metal purists as well as those looking for something that’s more depressive than furious. A nice, old school feel without having to resort to uber-lofi production qualities and putting a bit more extra nuance into the sound.