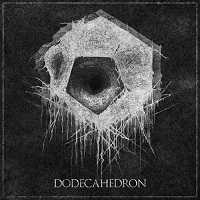 With a name that sounds more like a cold medicine than a black metal moniker, Denmark’s Dodecahedron (definition: any polyhedron with 12 flat faces) revel in the obtuse and relatively un-engaging world of avant-garde BM on their self-titled debut. The jist of the matter is that there’s only a handful of bands that have managed to successfully snych-up artful noise with arctic noise (i.e. Arcturus, Lantlos, DHG), and Dodecahedron is nowhere near the same ballpark as those bands. This album is about as impactful as a pillow fight.

The band’s modus operandi is the confluence of frazzled riffs (lots of odd chord choices) and atmospheric sojourns (which are rather boring), something isn’t necessarily a foreign concept these days. Problematic for Dodecahedron is that the elongated instrumental stretches they’re so privy to have immense difficulty in hitting their spot, like on “Vanitas” which starts promisingly, then veers off into an atmospheric lull. The closing three-part “View from Hverfell” does have the occasional wistful moment (part III gets the nod), yet it’s hardly enough to rectify the album’s mostly banal nature.

No one will find fault with being out-there and opportunistic but Dodecahedron is several leagues behind the aforementioned trio of bands that have managed to be memorable and interesting, all the while operating under the tag of avant-garde black metal. For a style

that’s rather difficult to execute, Dodecahedron seem rather punchless…almost clueless.