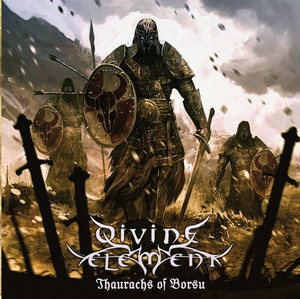 When one happens to think of I, Voidhanger Records, the first thought is that of more avant-garde and forward-thinking black metal. Therefore, it was initially odd to see a Viking-themed band hit the email for review. That is, until some further investigation overturned that it was Spectral Lore mainman Ayloss on guitar. Add to that session drummer extraordinaire Hannes Grossmann (Alkaloid) and you’ve got something that a number of labels would be clamoring for.

Cliché as it may be, the easiest way to sum up Thaurachs of Borsu is to think of Amon Amarth if they decided to pull in some significant pagan black metal influences. The Viking feel is not hard to grasp, even only a few seconds into the title track. Driving, heavy riffs with a flair for the catchy line up with plenty of both melodeath and black-ish melodies and some sythnwork take a bulk of the time. That’s not to say the band is one note though, as they move from death to black to folk to symphonic to atmospheric at the drop of a hat. There’s only 5 tracks, sprinkled between a few interludes, and each one seems to have a distinct feel and epic sense. From the more melancholic “Beyond This Sea” to black/death goodness with a hint of folk in “Onto the Trail of Betrayal,” the songs feel fleshed out, and the only bummer is that despite the clear effort, genre-standard growls and a short run-time make this feel like only a “good” album instead of an “outstanding” one. It just feels light in that sense, and another song may have cured that notion.

Fans of Spectral Lore/Ayloss are sure to find Divine Element to their liking due to his distinctive guitar playing. While Thaurachs of Borsu is an enjoyable listen, it does seem like the band’s finest hours are indeed in front of them.