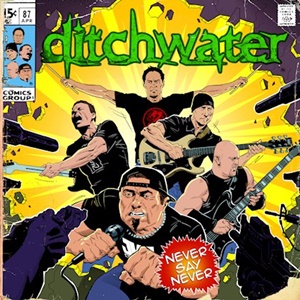 Establishing a sound through six independent album releases since their inception in 1993, Ditchwater from Chicago endure all the bumps, bruises and changes that the music scene throws at them and move forward. Wishing to develop something fresh, Never Say Never as the seventh record sees the band aligning with Pavement Entertainment to hopefully gain a wider/deeper footprint in a crowded climate. Straddling the fence between modern heavy rock and classic heavy metal influences, these ten tracks showcase a unit adept at writing and executing memorable hooks, solid melodies, and driving songs at a variety of tempos.

The low, crunchy guitar riffs and equally punishing bass/drum work form a symbiotic platform for vocalist Mike Meadows to bellow over – his voice shining with the right grit and proper melodic natural abilities to get songs such as “Enemy of the People” and “The End” over instantly. It’s as if the band has studied the work of classic bands like Black Sabbath and Judas Priest just as much as the recent works of Alter Bridge and Five Finger Death Punch – keeping the songs lean and mean but also delivering some strong main riffs and logically extending them out into material made for larger audiences to jump, stomp, and crowdsurf to. When they lock into a heavier song like “The Way You Are”, you can feel the driving energy and aggressive, semi-talkative overtones during the verses tempered with a modern rock-style chorus that pushes Mike in his upper range. Ditchwater aren’t aiming to rewrite the playbook for the genres they pull from – comfort comes from staying in their lane, executing great songs with exhilarating lead breaks at times, and getting onto the next idea quickly. The headbanging frenzy within “How Many Times” because of the wall of jackhammer guitars against a fervent groove-based double kick platform makes this a back half favorite – and paying homage to Motörhead through the closing cover for “Iron Fist” ties up the record nicely.

Enjoy the comic book style cover art as well as this material – as Ditchwater proves that seasoning, experience, and endurance pays off in a thrilling product.