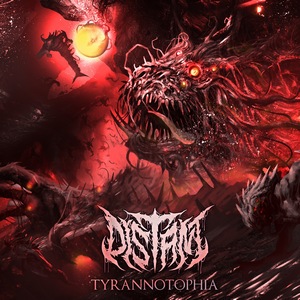 Merging deathcore and slam together isn’t exactly the easiest task in the world. Both genres rely heavily on chugging elements that can easily lead to boredom on the listener’s end if not handled properly. Something that Distant’s full-length debut, Tyrannotophia, seems to acknowledge at some points, but at the same time never seems to find a way to really deal with it as the album progresses.

Given the two genres that Distant is playing towards, there’s inevitably a feeling of brutal heaviness to it. The guitar tone and vocals are sure to grab those who have an affinity for the material and force out one of those “whoa, that’s so sick” shouts. The breakdown that ends “Abhorrence” is one of those moments, where sheer primal energy runs through the speakers and all but runs you over. They attempt to incorporate some horror-esque atmosphere into it at points as well, such as on “Zeroten” and the title track, which helps to spice up the track (not to mention some light melodic elements) but they don’t use this aspect nearly enough. What ends up happening as the tracks continue to flow are some moments of complete boredom. It’s supposed to be heavy, but when you primarily set the tempo to the mid-range and below (gotta grab those breakdowns) and all there is to the music is chugs and pig squeals, it reaches a point where it simply feels like more of the same. Longer tracks like “Heirs of Torment” and “False Gods” are incredibly guilty of this and become an absolute slog. Then you have under two-minute songs like “Endgame” and “Chasm of Despair” that simply feel like half-baked ideas that never go anywhere.

Tyrannotophia starts off with some solid intentions but never ends up fulfilling any of them. Between a plethora of boring mid-tempo chugs, genre-standard vocals, and an overall lack of atmosphere, it begins to feel like a chore to listen to, even at 35-minutes. 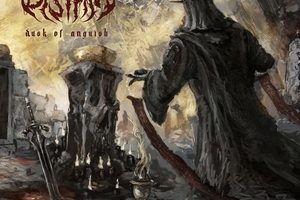