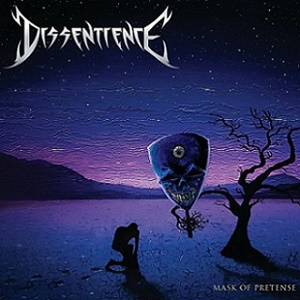 Forming under the moniker of Why We Fight in the early 2010’s, this PA foursome became Dissentience in 2013, releasing their debut demo a year later and now finally issuing the follow up in Mask of Pretense. Embracing the multi-genre facets available to musicians these days in the metal genre, these five songs contain a foundation of melodic thrash and death, but aren’t afraid to venture into modern or progressive pastures when necessary to flesh out the ideas.

The rhythms and tempos match up to provide that instinctive swing element necessary for massive spasmodic action. It can be initially thrash / groove activated for the start of “Maniac” or the Forbidden-esque drum/guitar chase sequences that break into some hefty Revocation-like progressive potency during “Chasing Existence”, displaying proper versatility to maximize less skipping around during the five tracks. Drummer Nick Scherden pummels his kit to the bitter end, ferociously attacking and throwing down serious blast action against some Dave Lombardo-like double kick/snare combinations during “Synapse Corruption”. At times commercial edges creep in, be it guitar sequences that are melodic in nature for spots of “Disinter” – but the savage Chuck Schuldiner-screams of Connor Valentin ensure that Dissentience won’t be attaining much terrestrial radio airplay beyond specialty stations. The lead breaks are tasty in terms of shred, plenty for the schooled musicians to study and emulate – while not going too left-field from the purpose of the specific arrangement on hand. Another aspect that makes Dissentience addictive is their placement of groove/mid-tempo riffs at all the right spots – enhancing the speedier/ heavier sections of “Synapse Corruption” that doesn’t seem like its under three-minutes in its colossal thrash/progressive death stance.

In a tidy 22 minutes and change, Mask of Pretense carries a lot of gold for Dissentience – and should gain them a decent buzz in the underground for its appeal to multiple audiences in the modern thrash, melodic thrash, or melodic death realms.