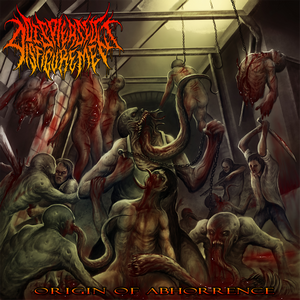 For those seeking the almighty slam, Canadian label CDN Records has become more of a standby recently, attaining slam from ‘round the globe. Recent acquisition Displeased Disfigurement hails from South Africa, and have previously released one album independently (2013’s Extermination Process). Long story short, it slams and it blasts – you know the drill.

Origin of Abhorrence isn’t exactly an album that needs some sort of deep, reflective statement to describe how it should make you feel. It’s more of a one-track mind, with its intentions firmly locked on knocking the listener into next week. And for that mission, consider this album a success. It’s decisively brutal in every sense of the word. Guttural growls, absurd levels of blastbeats, and some slammy riffs to get heads moving. Pick a track, any track, and you can hear the results for themselves. But where the album falls into trouble is in the overall sound. The drums are rather upfront, and when combined with a rather muddy guitar sound, it renders much of the riffing into an indiscernible mush. When the drums relent, you can hear more of the guitars but it’s almost constant battering and it makes the album frequently frustrating to listen to for more than a song or two.

Brutal? By all means, perhaps unrelentingly so. But discernible? Not in the least. It’s this factor that keeps Origin of Abhorrence from achieving its maximum goal of complete devastation. There’s been some strong slam releases as of late (Gape and Blastomycosis spring to mind), and there’s just not enough compelling evidence to stress checking this one out.