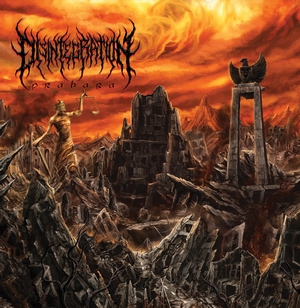 A new upstart in brutal death metal from Indonesia, Disintegration bring us their first full-length in Prahara. Having only one 2016 demo prior, it was the Brutal Mind label that caught this scribe’s ear, as they usually have a knack for snagging some acts that sit on the uberbrutal side of things. To that end, Disintegration fits right into that narrative.

Frantic, blastbeat-driven death metal is what Disintegration seems to be strongest in, and it’s as heavy as one would expect it to be. The riffing is somewhat intricate at these higher speeds, along the lines of similar acts like Goregasm or even Deeds of Flesh. Likewise, they know when to slow down the party into some groovier territory, which keeps the songs from feeling like one extended blastbeat. Devastating groovy crawls like on “Kelam” give a boost in the brutality department, with the weight of the riffing crushing down on the listener, as opposed to the faster sections that are simply meant to devastate the listener. That said, there’s still some room to improve things, as the whole thing does start to go into that ‘death metal haze’ due to the emphasis on brutality as the album rumbles along. Though thankfully it’s a spry 32-minutes so the amount of fatigue ends up being fairly minimal. A bit more emphasis on bringing in some grooves might alleviate the problem significantly though.

Those keen to the more brutal side of the death metal scene without resorting to total slam territory can keep Disintegration in mind as they move forward. Prahara showcases some technical chops without being too fancy, while dishing out as much musical devastation as the band can provide.