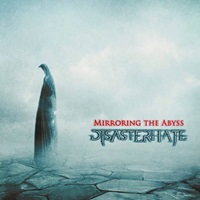 Journalists who’ve written in the scene for a while become immune to bio bravado. So when reading about these Italian thrashing death metallers on their debut full length album Mirroring the Abyss and their ‘high class music, charismatic singers, and riffs that caress the vibrating chords of the soul,’ I know I’m not dealing with pure brutality. Consisting of 3 females and 1 male (Dani on drums), these 9 songs blur between modern, aggressive thrash, a touch of death, and that powerful sound that made Nevermore such a mainstay for so many years.

There are times where Disasterhate throw down affinity for some of the best riffs in metal’s history: take the main riff for “In a Rarefied Morning Sun”, at 0:44-1:50 and again from 4:15-4:42, the band re-create the infamous Death “Pull the Plug” hook. “Toxik Sleep” seems like a reunion between Fear Factory and Nevermore, the drumming more in the former wheelhouse while the dark, brooding chord choices are right up in the latter, as guitarists Reitia and Klaudia tradeoff screaming, harsh and partial clean word duties.

Occasionally taking a left-field, progressive interlude turn to showcase more love for Opeth on the almost 3 minute “Blank”, the band can also turn up the furor and anger in a classic punk meets Holy Moses manner for “Day of Zero”, the guitar riffs driving forward as the rhythm section pummels and punishes bodies into possessed submission. The problem in full engagement for Mirroring the Abyss lies in this kitchen sink stylistic approach – to be dynamically diverse, they throw in doom-like passages or songs such as closer “The Isle of the Dead” that really fail to elicit any excitement, and the clean vocals actually work better than many of the caustic screams that veer dangerously close to metalcore-isms.

Maybe the second album will flesh out some of this whirlwind/metal stew approach and see Disasterhate establish a more focused songwriting outlook. Until then, Mirroring the Abyss appears to be more of a mirroring their influences record, amidst a sea of albums more unique and original than this.