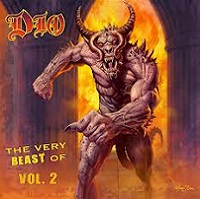 Not unlike his contemporaries in Priest, Maiden, and even longtime foil Ozzy, the back half of Ronnie James Dio’s career is sorely overlooked. When he got sucked into the infamous 90’s vortex, interest in albums like 1993’s Strange Highways or ’96’s Angry Machines was virtually nil. And that’s how most of us remember those times – the old guard was basically hung out to dry, supposedly never to return again. Clearly, it didn’t work out that way, but for the sake of perspective, it’s important to remember just how dead in the water many deemed Dio’s career. Good to know they were wrong.

Down to business. The Very Beast of Vol. 2 is the second installment of its kind, focusing on Strange Highways and beyond. A few live cuts are tossed in, as is Magica leftover Electra and the last song Dio ever recorded, “Heavy Metal Will Never Die,” yet the strength of this compilation lies with flavorful numbers like “Push,” which as some recall, had Dio parading with Tenacious D in a music video. Nevertheless, “Push” is the exact type of song that came to embody Dio’s final studio albums, a sort of solidified, angular track, with a striking chorus and great Doug Aldritch guitar work.

Live staple “Killing the Dragon” is the obvious first song, with a rhythm that quickly reminds one of Ozzy’s “Bark at the Moon,” although Dio’s vocals are the real show-stopper. “One More for the Road” was (and still is) the best cut from 2004’s Master of the Moon, while the grueling and dark “Black,” “Feed My Head,” and “Hunter of the Heart” are hardly throwaways, but hook-oriented charmers that manage to thrive despite relative simplicity and easy riffing.

Unfortunately, the classic pair of Holy Diver and Last in Line will forever overshadow the latter years of Dio’s career. Yet, The Very Beast of Vol. 2offers some strong, if not remarkable songs, some of which should stand the test of time, much like our man Dio already has. Hard to believe it’s been more than two years since he took his final bow…