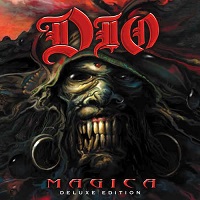 Having escaped the 90’s by the skin of his teeth, Ronnie James Dio found fresh footing in the 00’s, starting with Magica. Looking to bounce back after the poorly-received (and clunky) Strange Machines album, the singer regrouped with guitarist Craig Goldy, bassist Jimmy Bain, and drummer Simon Wright, forming a writing team far superior to that of those misguided Tracy G years. The result was Dio’s first and only concept album, and a return to form that while hardly daring, was the right move at the time.

The deluxe edition of the album comes with a bonus disc that features the story of Magica told by Dio (always fun to hear our man tell some stories), along with six live bootlegs of tracks from the album, and two additional cuts, which should be the primary reason for purchase. The tracks are “Annica,” which was initially found on Japanese versions of the album, and “Electra,” a song initially intended for the second and third installments of the story. Neither are going to split the world in two, but it is “Electra” that hits home the hardest, for it’s considered to be one of the last few songs left in the Dio vaults.

Given its 2000 release, Magica sat very well in the Dio catalog (check out the doomy “Lord of the Last Day” and bristling “Fever Dreams”). It was the perfect setup to Killing the Dragon, an album considered by many to be the man’s best late-career work. Magica will hopefully get its time in the sun, just like the rest of the Dio discography should. Such a shame we never got to hear parts two and three.