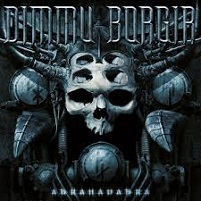 Much better than the half-assed In Sorte Diaboli, Dimmu, in spite of shedding half its line-up has managed to bring their overly-symphonic sound into the new decade, drawing an instant parallel to its breakout Enthrone Darkness Triumphant album. Granted, this sounds nothing like Enthrone…, but the orchestral spirit and garnishments presented here are something only a band like Dimmu could pull off back in 1997, and now in 2010.

Without keyboardist Mustis (who has rumor would have it, was responsible for the bulk of the band’s songs), there is a noticeably different vibe toAbrahadabra. Whereas there would be more space and atmosphere before, this time out, there’s more of a direct attack. These songs don’t fuck around, if that’s the best way to put it – the riffs and the dominant, just dominant orchestra are unified.

Lead single “Gateways” sounds initially like a dead-ringer for Cradle of Filth (whom Dimmu have long surpassed), but repeated listens reveal an immensely hummable track, with some memorable female vocals tacked on at the end. “Dimmu Borgir” takes the melodic reigns here, with lead guitarist Galder doling out a gorgeous and somber lead melody, while “Ritualist” sees new drummer Daray (ex-Vader) shine via an array of blast beats.

In terms of where the orchestra works best, we’ll point to “The Demiurge Molecule,” a song that is laced with big, overflowing movements, only to be pushed back into black/thrash territory. “A Jewel Traced Through Coal” emerges as the most extreme track of the bunch, proving that Dimmu can still hold down the BM fort if it so desired, as does “Renewal,” which boats another killer Galder lead and some cool stop-start action.

Considering the band’s stature and just how immensely popular they are here and across the pond, it would be so easy for Dimmu to pop out a trite and easy album. Frankly, many of us have long wondered when that time will come, but it’s not now – Abrahadabra is deep, challenging, a veritable labyrinth of all of the things Dimmu does right…and that’s a lot. They’ve been able to withstand the loss of Mustis and bassist/clean singer Vortex (who really isn’t that missed here), and in the process, made the album that should have followed 2003’sDeath Cult Armageddon. For an album that could have seen everything go wrong, Abrahadabra is exactly what Dimmu needed to produce.