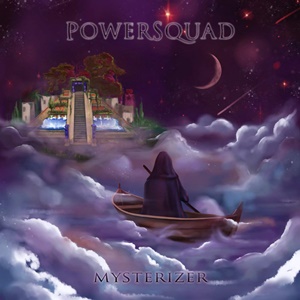 The solo project of guitarist Dimitriy Pavlovskiy, a Ukraine guitarist affiliated with bands like Majesty of Revival and Grotesque Orchestra, Powersquad is a neoclassical/progressive-oriented metal outfit on their fourth studio release with Mysterizer. A multi-faceted songwriter and instrumentalist, Dimitriy plays guitar, bass, drums, and some keyboards for this act – fleshing out the sound through keyboardist Ruslan Mikolyuk and bassist/vocalist Vitalii Popfalushi. You can expect exemplary interplay and fluid, intricate arpeggio-laden breaks from the keyboards and guitars, plus a variance of speed/mid-tempo numbers that showcase a set of musicians very adept and knowledgeable at their craft.

The axe skills and propulsion of musicianship overall lead your ears down the craft of Stratovarius, Symphony X, Yngwie Malmsteen and a few conventional influences like Annihilator or Accept/U.D.O. depending on the framework of the material. Bass play and flashy tapping finishes off an uplifting “Fill the Sky”, while the subsequent offering “Return from the Grey” opens with some calmer, classically-based acoustic guitar strumming before the power riffs and solid drum groove takes over in that standard power meets traditional angle. When the three-piece wants to throw down their chops and go full on neoclassical progressive, you get “Endless Sun” – a double kick foundation and soaring melodies allowing the guitars, keyboards, and bass to dance back and forth into technical flurries of splendor. An interesting surprise takes place in the closing cover of “Cold” – from the latest Sonata Arctica album Talviyö, their interpretation pushes the tempo and speed up tenfold to where most remember SA during their early glory days – as a result making it a magnificent effort.

What could be a bit of a sticking point to full on appreciation for Mysterizer would be the high-pitched warble of Vitalii. He sounds like he’s singing with a full barrel of helium in his lungs – even higher than Chris Bay of Freedom Call, the almost sinister edge has an unintended comical quality that makes songs like “Book of Myths” or the 7:37 progressive mind-bending title track tough to swallow, no matter how magical the musical movements may be. Possibly something for Dimitriy to think about on the next Powersquad offering, as a more potent belter could be that extra selling point for the consumers. If you love neoclassical shred in a progressive/power context, Mysterizer has the musical muscle to check off those boxes in spades – too bad the specific vocalist and his approach weakens the overall affair.