Dillinger Escape Plan – One of Us is the Killer (Sumerian/Party Smasher/Inc.) 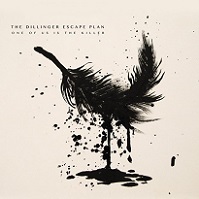 Plenty of fascination, interest coming along with Dillinger as those kamikaze Relapse years become more in the rear-view. Frankly, there were plenty that didn’t think these guys would last, this scribe included, for the band’s maniacal stage shows including broken bones, destroyed amplifiers, and crowd attacks came to overshadow the music, which has evolved from mathcore to something altogether unique. There’s no real argument with that – Dillinger is as unique as they come, and on their fifth full-length One of Us is the Killer, keep plenty of folks guessing.

The opening one-two barrage of “Prancer” and “When I Lost My Bet” nudge their way back into those banzai spazz-core days. Well, not “nudge” – they throw elbows and kicks, as the dissonant guitars rage and Greg Puciato is off his rocker, as usual. “When I Lost My Bet” is particularly disheveled, a song the band premiered at this year’s installment of Revolver Magazine’s Golden Gods awards. Talk about an audience that can’t hang with this stuff…

Puciato is singing better than ever, even with some cool vocal vaults on “Hero of the Soviet Union” (what a songtitle…only Dillinger) as well as “Paranoia Shields,” one of those quasi-accessible songs the band has been trotting out since Miss Machine. Still, it’s all in the harried, bristling action of “Understanding Decay,” “Magic That You Held Prisoner,” and the highly experimental “The Threat Posed By Nuclear War.”

Dillinger never fails to not challenge their listener-base, and have become an insular, but highly engaging item in the extreme metal scene. One of Us is the Killer gets the nod over 2010’s Option Paralysis, but also is another feather in the cap of a band that is far past being a novelty.