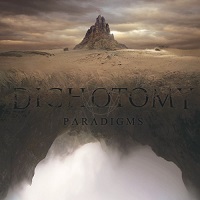 Nary a band like Dichotomy coming out of Ireland – we’ve largely whet our whistles (at the pub) on the likes of Primordial and their Darkest Era hatchling, so hearing their viciously modern brand of technical death metal was an eyebrow raiser. The band is presently unsigned, but doesn’t sound as such – their Paradigms debut has all the trappings of a modern-day death metal album: Triggered drums, near-perfect guitars, and vocals way too high in the mix. So yes, it lacks in personality…didn’t think we’d say that about a band from Ireland.

Anyway, Dichotomy (who formed in 2010, we should add), are quick on the fretboard and ready and able to jostle with technical runs with stop-start precision. However, one has to contend with the loud-and-proud vocals of Kev O’Connor, who suffers from the Chris Barnes syndrome of being placed too high in the mix. Since the band fails to realize the vocals are easily the most forgettable aspect of death metal (maybe the bass too, but don’t tell Alex Webster that), songs with flash and panache like “Covenant of the Forsworn” and “The Sentient Oppressed” never quite reach their full potential. And let’s not even get into the fact they used the same voice sample Evergrey used at the beginning of their In Search of Truth album on “No Catharsis.” Do some research, gentlemen!

In what has become our standard response to new, unsigned bands making mistakes on their initial forays: All can be rectified. Dichotomy should have a wider window of success for their avoidance of dreaded beatdown territory and their willingness to hang out with melody. Paradigms, though, is quite emblematic of a band on their first album, still figuring things out…