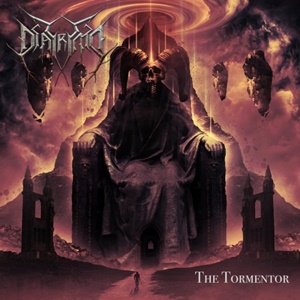 Forming in 2015 with brothers Theo and Alex Härkesjö, Diatryma are a Swedish quartet that straddle the thrash and death genres with this full-length The Tormentor. After issuing their debut Mental Chains EP in 2017, the band has released a series of singles over the past few years gearing up for this record. Sonically listeners can expect a sound that can be slightly progressive and energetic, while also executing evil riffs and a mix of growls and screams vocally to make the proceedings dynamic.

Shorter songs like “Catharsis” and “Tyrant” possess direct impact – the occasional gallops and hard- hitting drums for the latter especially enticing, while the circular guitar twists and haunting growls in the former provide the proper earworms around the groove-oriented thrash platform along with occasional keyboard background supplementation. Guest vocal support from Ronny Hemlin (Tad Morose) on the title cut gives this closing track a bit more melodic, dramatic flair befitting of the arrangement, while “Purgatorium” contains interesting tremolo licks and proper clean additions from Soilwork/The Night Flight Orchestra’s ‘Speed’ Strid. The interplay between the four-piece creates numerous standout highlights – especially the off-time transitions or mood shifts from death to atmospheric sequences, “The Servant” a big head turner in this regard that can be progressive one second, ominous and doom-oriented the next. The main vocal roar from guitarist Wille Persson possesses that discernible quality amidst the fierce nature of his voice that will remind most of Johan Hegg of Amon Amarth and possibly Christian Älvestam of Solution .45. Diatryma as an act intertwines numerous European/America thrash and progressive death influences – sophistication and finesse integral to the style and substance on hand.

Clocking in at a very respectable eight songs and thirty-six minutes, The Tormentor contains a great mix of material that’s catchy even in its progressive nature – and should grow even more as they gain confidence with their obvious talent and abilities at their craft.