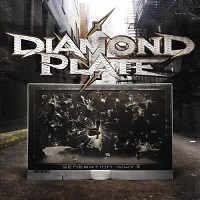 Someone’s gotta keep this retro thrash ship afloat, right? It didn’t take a rocket scientist to figure out the scene would eventually burn itself out after every loafer with a classic Slayer shirt and a pair of high-tops would try to fly the thrash flag, leaving only a select few to push forward. These things happen all the time in metal. Illinois’ Diamond Plate are a bit late to the party, having formed in 2004, only get their shot now thanks to Earache, thus releasing the band’s Generation Why? debut full-length.

Not as spunky or juvenile as their contemporaries, Diamond Plate keeps things in check with razor-sharp riffing, usually of the chunky variety, as heard on album standout “Relativity,” which has a distinct Exodus vibe. In fact, Gary Holt and the boys’ influence is readily apparent throughout this 11-song effort, for Diamond Plate employs a rash of those chunky, down-picked riffs that are essentially the foundation of the Exodus sound.

Because Diamond Plate’s sound borders on maturity (“maturity” in thrash metal? Really?), there’s plenty to find common ground with on the Slayer-like title track, or the fist-pumping “Waste of Life.” The band’s adherence to finding the groove (and sticking with it) keeps the album from getting stale and avoiding the dreaded d-beat syndrome where the constant sound of polka and thrash beats become too prevalent. That’s not the case here, even though singer

As Diamond Plate are probably aware, there’s virtually nothing new that can be contributed to the thrash metal sound at this stage. Retro thrash effectively dashed any hopes of that happening. Still, Generation Why’s swagger and resistance to play it dumb makes it a much more interesting proposition than a lot of what the thrash brigade has to offer.