Tuesday, 4th May 2021 By Katarina McGinn 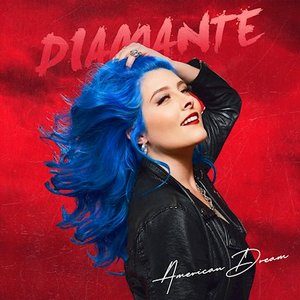 Quickly establishing herself as a force within the hard rock world with her 2018 debut Coming in Hot, Diamante makes her independent return with American Dream. Championing a sound that has some clear footing in the ‘80s hard rock scene, but effectively modernizing it to today’s world, Diamante takes her unique approach up a notch with this second outing. American Dream is a fun, summer album to crank with the windows down.

There’s a nice level of grit and toughness to Diamante’s music (and voice) that gives her a quickly identifiable sound. There’s no shortage of rock attitude and Sunset Strip vibes on the lead-off title track, as the guitars groove and crunch around a rocking chorus that will quickly embed itself in your skull. “Ghost Myself” comes in with some more modern vibes and driving guitar, and combines this with some bouncier moments that bring hooks even closer to the forefront. Later cut “Unfuck You” provides some poppier moments within an anthemic format, while “Obvious” slows down the tempo a bit while delivering big riffs and groove. But there’s also a softer side to indulge in as well. Stripped down ballad “Unlovable” provides a breath of fresh air and genuinely sweet moment after the rollicking opening, and “Hopeless” elicits a melancholic ending (outside of a great acoustic rendering of “Obvious”) albeit with a bit more guitar in the background. Given the success that Diamante had with a duet on Bad Wolves’ “Hear Me Now,” it’s nice to hear a big return, and her cover of Goo Goo Dolls’ “Iris” accompanied by Ben Burnley (Breaking Benjamin) gives the track an interesting dynamic for the pair to play off of.

In listening to American Dream from beginning to end, it becomes clear that Diamante’s greatest strength is her personality. Each of the tracks moves a certain way, from hard rocking cuts to energetic bits of pop to moving ballads – Diamante covers all of the bases and does so with style. Her unique spirit unabashedly comes through in the end, and American Dream should solidify her as one of the strongest up and coming rockers around.