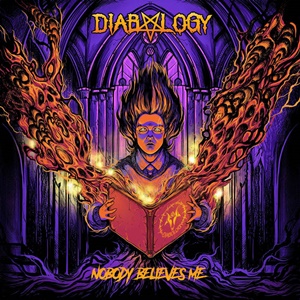 Channeling their youthful angst, teenagers Diabology have primal instincts at the ready for their debut full-length Nobody Believes Me. Calling Los Angeles, California home, the quartet appear intent on delivering a lean and mean cocktail of influences, occasionally veering into punk and blackened textures while using thrash as a major foundation for these twelve tracks. After a few spins, talent is evident in many spots – plus a few growing pains that hopefully will be smoothed over as these musicians gain more seasoning and chemistry together.

The speedy riffs and fierce tempos contain counterbalance transitional mannerisms that produce some of the album’s catchier, more melodic moments – the instrumental work for “Seed of the Prophet” an easy example through a solid, fluid lead break and complementary mid-tempo rhythms. Guitarist Jesse Bergen also handles the vocals, and his blackened screams cut through the mix in chilling fashion – but when he chooses to be a little calmer and restrained for the verses in “Judgement Day”, it comes off weak in an almost emo/alternative aspect. Throwing a noisy/S.O.D. quick hitter like “About You” in 48 seconds gives the record that reset before a more Motörhead-esque “Lost Viking” assaults the senses, the slower transition with its Viking-guitar textures appropriate to break the normal punkish thrash foundation. The production and raw tones exemplify Diabology as a focused, hungry band that want to release pent up frustration in a constructive manner from the first song to last. Occasionally injecting some blast beats and tremolo-fueled measures in a blistering number like “Defiling Innocents” could be a promising sign that this band can take risks and make them work in their favored style.

Nobody Believes Me gives Diabology a decent record to gain growth and perspective from – as we all start somewhere, right? Once they shed a bit of their pedestrian / beginner-like repetitiveness in certain areas vocally and musically, this scribe believes they’ll make an even stronger impact on the underground.