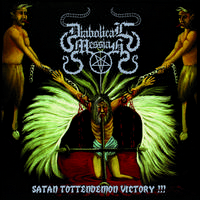 Crude all the way through, right down to the (somewhat) comedic, yet no less thought-provoking cover art, which depicts ‘ole JC in a state of duress. (Translation: This stuff isn’t shocking circa 2014.) Diabolical Messiah happen to be a Chilean death metal band who formed in 1999 and are attached at the hip to Chile’s respected, but awfully underground scene. The band’s most recent effort, Satan Tottendemon Victory!!!, initially saw release in 2010, but is getting another lease on life via Blood Harvest for the vinyl market.

Stylistically, the band are rooted in the fundamentals of early 90s American death metal – Incantation, Morbid Angel, etc. The band’s technical palette is not without limitations, although the harsh atmosphere, bare production job, and unearthly movements created by the vocals tend to make up for such shortcomings. Variety certainly isn’t one of the band’s long suits, a frequent occurrence being similarities between songs (i.e. “Celestial Ceremony” and “Master of Chaos”), but such things are bound to happen due to the band’s limit exposure to other, more advanced forms of death metal. Still, the rumble and tumble of “Buried Throne” has merit, specifically in those doom-death riff choices, while the brevity and punchiness of “Perverse Domain” is another jam worth noting, if only for the diseased vocal vomit of Caesar.

Primitive, suitably dark, and naturally limited in its execution, Satan Tottendemon Victory!!! showcases Diabolical Messiah’s penchant for to-the-gut old-school death metal, but not much more. Then again, there’s a current fascination with this sort of stuff, not to the level that was found during the style’s heyday over 20 years ago, but nostalgia, and unintentional hokiness still stand for something these days.