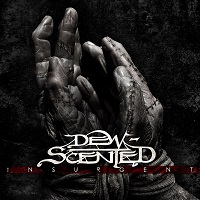 A bit of a curious release considering the band’s last studio album Icarus was released last year, Insurgent is a compilation to celebrate the 20-year mark for Dew-Scented. Now, there might be some punters out there who think the Germans are totally undeserving of a compilation such as this, but consider: The band has lasted two decades with arguably one of the worst names in all of metal. Perhaps it gives hope to bands with worse monikers, wherever or whoever they are…

Nineteen songs comprise of Insurgent, making it a mixed bag of live recordings, covers, and leftovers from the Icarus sessions. Putting “Confronting Entropy” and “Guided by the Dead Light” first wasn’t a bad idea – both songs are highly indicative of the band’s Euro-Slayer sound, yet here, they become more of a footnote than anything, primarily because there are 17 other tracks to contend with. The band might have been better suited for saving these cuts for their next studio album – or making a short and sweet EP out of them.

Live cuts culled from the 2012 Icarus touring cycle make up for the meat of the album, and since live recordings of pretty much any thrash or death metal band are next to useless, the cover songs from the likes of Incubus, Prong, and Wasted Youth are the only selling point here. Prong’s “Steady Decline” specifically, is the go-to number on Insurgent, with the Germans tying on some of simple, meaty, to-the-point riffs that Tommy Victor has made a career out of. It doesn’t make one wonder “What if Dew-Scented decided to give up polka beats altogether?” yet, it’s a standout moment in an otherwise ho-hum compilation that only pure Dew-Scented completists might seek out.