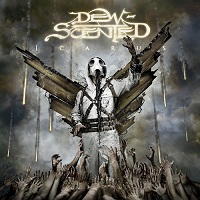 If Dew-Scented had a dollar

or a Euro (they’re German after all) for every time some hack inquired about their name, then they probably wouldn’t have to worry about releasing safe and predictable albums like Icarus. In actuality, it’s not the worst name thrash metal has to offer, as Rumplestiltskin Grinder is easily the worst, although they’re a better band than Dew-Scented. The Germans are the embodiment of the unfortunate scenario that seems to plague a lot of veteran metal bands – they’re simply

too afraid to venture outside of the box, thus releasing what amounts to the same album as the album that precedes it.

With the indomitable Leif Jensen still out front barking his head off, Dew-Scented’s European thrash sound is no worse for wear than it was half a decade ago. In fact, the rambunctious “By My Own Hand” revels in Slayer-isms, complete with ample Lombardo beats and tremolo picking that will make wrists ache. Still, the fact that the band has undergone a dramatic lineup overhaul the past few years gives little indication of any changing of the guard. One could easily swipe cuts like “Thrown to the Lions,” “Gleaming Like Silver” and “The Fall of Man” and dump them on 2010’s equally-blase Invocation.

Many cite these guys and Hatesphere as being in the same boat. And one could see why – they both play a brand of European thrash with death metal garnishments, have only one original member, and sport suitably silly names. Yet, were Hatesphere zigs and zigs, Dew-Scented draws a straight line, forever burdened by their tunnel visions, which at this point, is going to prompt the term “Pulling a Dew-Scented.” Meaning, writing the same album over and over again.