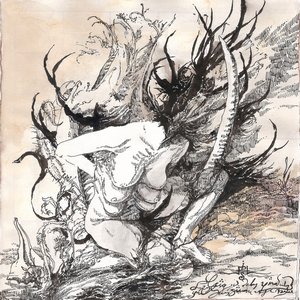 While conventional wisdom holds to not judge a book by its cover, metal albums aren’t books and the cover is often quite indicative of what the listener can expect to find within. Fog-laced forests adorn many black metal albums (Cascadian or otherwise), Garish monuments to human vanity tend to grace hair metal album, and portraits of mythical adventure are portals into most power and traditional metal forays.

Look upon the disfigured human form and the viral darkness blossoming from it and you, dear listener, can guess what you are to find within The Arteries of Heresy.

It’s exactly what you’d expect. Not that that’s a bad thing.

Similar in build and execution to Unsettling Whispers released by Gaerea earlier this year, this is a suffocating, doomy take on the black metal form. Masked figures and the void gazing take on the form are nothing new and there is no reinventing of the blackened wheel here. If the aforementioned Gaerea, Deathspell Omega (though without the penchant for chaos), or Death Mask (or others from the now desolate Chicago scene) haven’t been to your liking, The Arteries of Heresy isn’t going to change your mind. The five songs are built using the same parts and drowned in the same crushing atmosphere. Semi-traditional black sections sear the mind and give way to doomy sections to crush out whatever spirit of resistance remains.

Though the album occupies a single-vinyl friendly 35 minute run time, the faceless aesthetics employed by the band at times carry over into the songs. In initial listens there isn’t a lot to separate ‘Consummation” from “Sin Assimilation” from “Her Divine Arteries”, though over time the fog begins to lift and the ears can pick apart signature moments. If the album were significantly longer (45 minutes or beyond, as others have done this year) it would’ve been a good deal less tenable. Fortunately, relative brevity renders this darkness significantly more palatable.

The season of many forms of darkness looms upon us, a grand pre-winter apocalypse heading toward the greater Washington DC area as I write this (while I don’t expect much from the weather, I do expect everyone to lose their mind on the road). They, I expect much like the unfortunate many-mammary’d figure undergoing transformation on The Arteries of Heresy, will be bursting with an uncontrollable darkness. It is the season, after all.