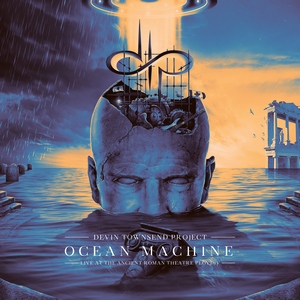 No stranger to releasing live albums at this point (particularly with much of the spectacle that many of Townsend’s one-off performances tend to generate), the latest in this line is special for a few reasons. First off, it’s celebrating 20 years since the excellent Ocean Machine was released and sees original bassist John Harder return. Secondly, there’s a fan-picked set that occurs prior to Ocean Machine from start to finish. Lastly, it serves as swansong for the Devin Townsend Project, as he has dismantled the act since this performance.

So much to dig into, even from just the sheer musical side of things. The fan-picked set consists of two discs with some very solid (and rare) choices, including “Om,” “A Simple Lullaby,” “Deep Peace,” and “Gaia.” All done with the accompaniment of a full orchestra to give them an even more special vibe. Of course, the main attraction is that of Ocean Machine, and it certainly feels just as exciting and enthralling as it did twenty years ago. The orchestrations added are rather seamless, and tend to enrich the material further. The set is precisely played, and the emotions of tracks like “Night,” “Things Beyond Things,” and “Funeral” are quite poignant. For those who have enjoyed the album on disc, consider this an effectively updated version with a fantastic production.

As for the video itself, it does give a nice sense of scope and never tends to be “overly busy” as some dvds tend to be lately. The mix itself is good, and Devin himself is at his most charismatic and charming, something that the video component aids in capturing. In addition to the setlist(s), there’s also an added documentary that the Dev-obsessed will be quite keen to check out, with behind the scenes and interview footage to digest.

All in all, this totally works as a fitting look back at some of Devin Townsend’s strongest work and a suitable goodbye to the ‘Project. It’s chock-full of content and it’s clear that Townsend put plenty of creative energy into getting the best sound/video he could muster. May he continue to fascinate the metal world with whatever he decides to do next.