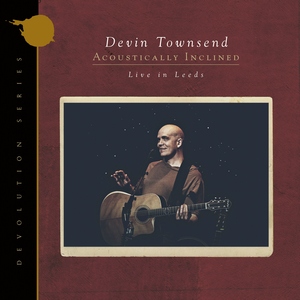 No stranger to releasing live material, Devin Townsend is now presenting a group of works under the Devolution Series. A collection of releases that Townsend didn’t want to claim as major releases, but still would be intriguing to fans, such as some recent live events as well as the string of quarantine concerts that he has done. The first of these is an acoustic concert from 2019, which has been previously released in video form, but still worth checking out for Townsend fans.

The strength of this quiet, laid back, and intimate performance is obviously that of Townsend himself. This more gentle atmosphere brings with it more of a storyteller aspect, and this release really captures his playfulness in audience interactions. There’s much to smile about with the in-between song banter as well as some little goofs during the songs with some quips as the songs go without tarnishing the atmosphere of the music. He also has some fun with some of the higher notes that he hits (see “Ih-Ah!”) and the crowd reactions give it an added playfulness. As for the tracks themselves, it’s a nice spread of some of his stronger tracks in this area, running the gamut from some Ocean Machine, DTP, Strapping Young Lad, and more. No real unexpected tracks per say, but with the sound quality and overall strength of the set, it’s hard to find anything to complain about in that regard. Even with audio only, it’s not hard to listen to this, close your eyes, and see yourself among the crowd – a testament to how genuine the set feels overall.

The first in the Devolution series is a nice treat for Townsend fans. While the diehards may already have access to this one due to the video release, Live in Leeds is nonetheless an enjoyable and relaxed evening spent with the always entertaining Devin Townsend. An intimate performance to enjoy during our continued live music drought.