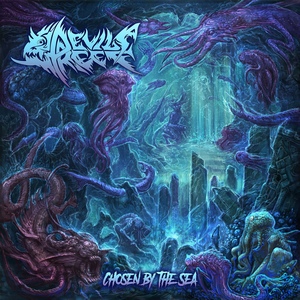 Who doesn’t love a good sea-inspired cover? The blues of Devils Reef’s first full-length album are rich and stunning, as are the HP Lovecraftian creatures that inhabit it. It’s a dazzling display, especially considering this is an independent act. Some added props for one of the coolest looking logos in recent memory, going so far as to have the band logo take the shape of a fish! That’s all great, but how does the music match up to this visual feast? Happily, it’s just as strong as the concept would have you believe.

A combination of technical death metal and thrash, Devils Reef impresses in their ability to stand out in an increasing market. Not only that, but the band puts first things first, and instead of having a thorough technical show-off clinic for an album, they take their technical prowess and inject it into actual, honest-to-goodness songwriting. The result is frequently scorching in tone, memorable for successive listens, and still provides an intellectual side to the musicianship. There’s an almost old school vibe in their brutality (and production) and it does aid in providing a sound that stands out. The thrash vibes (see the ripping “Lower Dwellers”) give a sense of urgency to the songwriting, as well as some massive hooks to coincide with some of the more technically-laced riffing. Eerie atmospheric moments also have their place, particularly on the standout closer “Summoning the Serpents,” with an extended melodic bit in the track’s later half. A combination of fretless and fretted basswork also stands out, in addition to the sometimes spiraling riffwork that first appears on “Cosmic Horror.”

It all adds up to a sound that is more than the sum of its parts, offering a grand spread of ideas that are fused together to create a version of extreme metal that balances intricacy, heaviness, and energy. Chosen by the Sea is a monstrous debut that fans of acts like Revocation are going to thoroughly enjoy. For only a debut full-length, Devils Reef has really nailed a lot of aspects with pinpoint accuracy and there’s a ton of potential to untap.