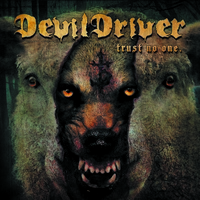 After the last Devildriver album, 2013’s Winter Kills, vocalist Dez Fafara returned to his roots for a bit with Coal Chamber for a bit. But the time was right to return to Devildriver, which now features three new members in its ranks since the last go-round, and Trust No One is the band’s seventh album. Those familiar with Devildriver’s formula will not be surprised with the results of what they hear.

The good and bad of what the band has always done is still the heart of the music at hand. One positive side, the band’s groove metal format always delivers a few catchy and memorable tracks. This time around, the clear highlight is the title track, which features some upbeat and energetic riffing (on the speedier side of things as well) that’s bound to find its way to your inner ear and stick around for a few days. The band specializes in pretty accessible riffs that still manage to maintain some malice, and “Retribution” and “Testimony of Truth” also provide some memorable moments as well. On the other side, Dez Fafara’s near-constant barrage of vocals do tend to get in the way of the rest of the band’s performance. Listen to a track like “Bad Deeds” and you can’t help but think it would strengthen the sound of the band if he would just take a breath once in a while (particularly the atmospheric chorus). It’s not that his vocals are weak – they fit the music quite well, and there’s a clear identity to them, but there’s just too many in a single track.

While not the type of album that’s going to win over many new fans, the current ones will be most undoubtedly pleased when they hear Trust No One. The adage of ‘if it ain’t broke, don’t fix it’ certainly applies.