Devil You Know – The Beauty of Destruction (Nuclear Blast Entertainment) 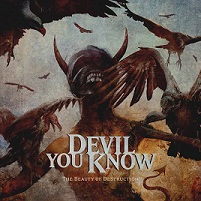 The primary beneficiary of Killswitch Engage’s forever immobile, but highly successful songwriting formula, ex-KSE singer Howard Jones has returned from a multi-year hiatus with a new outfit, the presumably Anthrax-moniker inspired Devil You Know. Jones, who boasts one of the more soulful and/or distinguishable set of pipes in metal, is joined by All Shall Perish guitarist Francesco Artusato and Devolved drummer John Sankey, suggesting the band would stretch beyond conventional melalcore realms, something they manage to accomplish without much issue on their enjoyable The Beauty of Destruction debut.

No real splitting of the atoms here – Jones’s vocals are in focus early and often, demonstrating his usual tenor and heart on opener “A New Beginning” (complete with built-in crowd participation chants) and the excellent “My Own.” Because those sinewy, near-EMO melodies that KSE are so fond of are largely absent, generous clean vocal portions on lead single “Seven Years Alone” match up well with the restrained, but fluid playing of Artusato. However, the ASP guitarist is surprisingly more of a complementary player here; his lively and arpeggio-happy playing will probably have to wait a few albums to come out.

Not quite the KSE-on-ASP pairing some were hoping for (and frankly, it would probably be a downer anyway), Devil You Know may not yet have fully tapped into the collective talents involved, however, the band amounts to being more versatile, and less predicatable than one would think, even though (and this will always be the case with Jones), it’s all about the choruses. And if there’s a go-to guy for soul in metal, it’s Jones.  Good to hear him belting ’em out again.