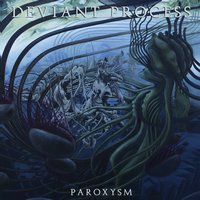 If Canadian technical death metal tickles your fancy and you haven’t jumped on board the Deviant Process bandwagon, it won’t take long for you to climb aboard once Paroxysm kicks in. The band’s first full-length effort, following up a 2011 EP, takes the spastic and frenzied waters that like-minded (both musically and geographically) bands like Cryptopsy and Quo Vadis have ventured and shifts into their own breed of technicality and brutality.

Despite the expected musical complexity, Deviant Process never forgets what has to come first – feeling. The band moves from riff to riff with psychotic glee, with progressive noodling giving way to some thick and tasty grooves to mid-tempo bludgeoning to even jazzier notes. Deviant Process masterfully merges all of these elements together with finesse and depth. You can get the impression from this with the length of their songs, which seem to stick between 6-8 minutes. You’d never get the impression they were that length if you feel out a track – it’s busy and moves frequently, but never cluttered or boring. The riffs and atmosphere (and notable bass presence) that open up the album with “Unconscious” set the tone for the rest of the album – intricate yet memorable, clear yet able to blow the door off your house with heaviness. In fact, it’s hard to make it through one song without finding something that checks off a “something special” box.

A thoroughly impressive debut all around with this one, Paroxysm makes tech death metal fun. No getting bogged down with smack you in the face musicianship. It’s there, but you’ll be so enamored by the flow and feel of each track that it’s being there becomes secondary. Expect this band to blow up once word about how strong Paroxysm is starts to overtake the Internet.