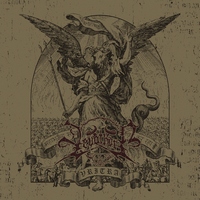 Conceptually in line with a band such as Absu (who have devoted their entire career to well-researched themes relating to Sumerian mythology and various forms of mythology and magick), Greece’s Devathorn has a theoretical basis upon Qliphothic ideals, which relate to Jewish cosmology. We could certainly go a heck of a lot deeper than that, but it would probably cause DR to get its words mixed up, not to mention detracting from the point of focus, which is Devathorn’s second album, Vritra.

Flush with the same treacherous BM basis as classic Dissection, Naglfar before they hit the skids, and the underrated Temple of Baal, Devathorn’s riff-first foundation is generally caustic, albeit readily palpable. In a sense, a good chunk of these songs don’t wonder down the mineshaft of repetition, nor do they spin their wheels after tossing too many ideas into the mix. Rather, the pulsating one-two opening run of “Veritas Universalis” and the excellent “Doctrina Fide” butt heads with the regular conundrum the above-mentioned trio faced: Where can melody be inserted and if so, to what extent? For Devathorn, the question only emerges across the relentless pounding of album highlight “Principles of Chaos,” which in many respects, is an endless cavalcade of diving tremolo picking and mercenary blasting.

To its credit, Vritra never takes on one significant form or direction, with the band spreading out via open-spaced combinations on “Sapphires of Vritra,” and a multitude of heaving voices from the depths on “The Venomous Advent,” a song that displays a rare moment in black metal of restraint. And perhaps most obviously, the ongoing push is best exemplified by the ten-minute “Promethean Dissent,” a tune that flows with eerie guitar mounts and a Behemoth-like swagger, if you will.

We’ve seen how far Absu has been able to take their career by being more esoteric with their concepts than the average BM band, which makes it possible for Devathorn to proceed the same way. If anything else, Vritra is an excellent starting point for this still-developing band.