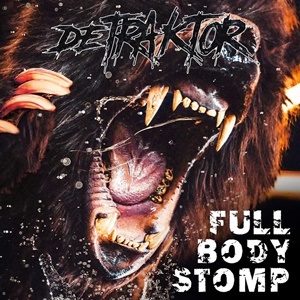 Beyond advancing up the label ranks from Violent Creek with their debut album Grinder to Massacre Records for Full Body Stomp, German thrash group Detraktor also had a bit of a shuffle in instrumentation/players between records. Boris Pavlov moved to bass from his previous guitar duties, taking over vocals while new drummer Pablo Cortez serves up a steady, groove-oriented diet in his style next to normal, conventional thrash beats. After taking in a few spins, most ardent followers of all things Sepultura, Prong, Pro-Pain and offshoots from these acts will find plenty to appreciate through these nine tracks.

The low tuned crunchy riffs land salvos to the heart, the bass/drum swinging components propelling those massive hooks even further – be it “Behave” or the Sepultura-esque “Perro” (think Roots-era here). When these gentlemen choose to expand horizons for the seven-minute “Seven”, the song begins in a Southern – Pantera/Down-ish manner, only to turn on a dime around the four-minute mark with distant, clean echoing guitar strains fused into a slow evolving yet penetrating lead break. The power chops barrage of snare/kick hits from Pablo Cortez during “Gorilla” elevates heart rates to triple digit numbers, soon settling into seesaw battle between the speed and heaviness during the verses/chorus. Extra noises or sound clips heighten awareness for the next riff/transition sequence – Detraktor well aware of their duties as performers and songwriters to keep their playing lean, mean, and in your face. Boris as a singer may not necessarily execute the most original lines (his voice in that Tommy Victor meets Lemmy delivery), but he does a serviceable job to get his point across. The swarming nature to the circular up-tempo riff during “Bear Fight” has a current Destruction-esque punch, although the stop/start shifts showcase a North American, crossover vibe.

Full Body Stomp has plenty of aggression/angst on hand – but could be a case of too much familiarity for influences to stand out in a genre of old guard classics beyond newcomers waiting to dethrone anything that stands in the way of world domination.