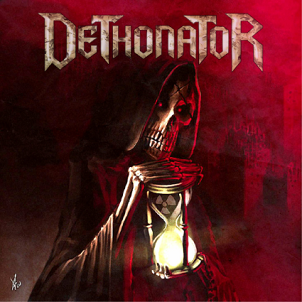 Five or six years ago, it was an exciting time to be a U.K. thrash band. The likes of Evile, Gama Bomb, Savage Messiah, and Sylosis brought an advanced display of musicianship that put to shame the yokels parading around as retro thrash in the States. The thought was that at least one of these bands would have broken through to the next level, but as per habit of U.K. thrash, there’s some sort of supernatural force preventing mass acceptance. Somewhere in the bog was Dethonator, whose 2010 self-titled album has been remixed, somewhat re-recorded, given new artwork, and hereby getting the reissue treatment via Germany’s Killer Metal Records.

To its credit, U.K. thrash bands often employed a vocalist who can actually sing, which is the case for Tris Linecker. The idea of melodic vocals over upward thrash has always been appealing, and there’s immediate rewards on the hook-laden “Harbinger” and “Shadows,” which is perhaps Linecker’s best performance on the LP. To that point, there’s no trace of power metal in Dethonator’s sound; they’re commonly prone to melody-driven songs (“Many Have Fallen,” in particular), while maintaining a sense of groove and dymanics. There’s the occasional death grunt, thus giving the band’s song about themselves “Dethonator” a partly cartoonish feel, but such things can be forgiven.

Dethonator’s self-titled debut still sounds modern, so it’s not like the Brits have dug this one out of the discarded demo graveyard or anything. Rather, it displays a fresh and dynamic take on thrash, putting melodies and vocal ideas first, which again, is a defining element of thrash from this territory. With a proper new album coming in 2017, Dethonator may end up being the last U.K. thrash band standing.