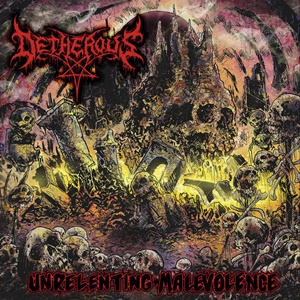 The amalgamation of various extreme genres to create an explosive sound has been a part of the metal scene since the fertile 80’s. In the case of Canadian act Detherous, the death/thrash union is of a vicious, sinister nature through all ten tracks for this second album Unrelenting Malevolence. Developing an underground following through a self-titled demo release in 2017, a live EP the following year, plus their first full-length Hacked to Death for Redefining Darkness for 2019, the quartet waste no time in setting sights on this aggressive blend of ripping riffs, caustic vocals, plus punishing rhythm section performances that launch bodies from stages, send fans in mandatory pit frenzy, or just obliterate your senses in neck whipping glory.

Going for the jugular immediately on “Interminable Mutilation”, these musicians pull no punches in terms of throwing a bevy of transitions or riff/style shifts, moving one minute from Cannibal Corpse-style bends into a mid-tempo Warbringer/Slayer-esque stomp section before the crazy lead section sends the arrangement into chaos mode. A host of North American/European influences battle back and forth, as guitarist Damon MacDonald floats between a maniacal scream delivery and venomous demon when summoning his darker, deeper inflections (think Death) through excellent, varied affairs such as “Encased in Gore” and “Erosion of Reality”. “Reek of the Decayed” features a special guest vocal appearance from Chris Monroy of Skeletal Remains, serving as a deeper contrast to the rapid-fire main melodies – the riffs / tempo stacked for maximum attack, drummer Dimitri LaRose going from wild octopus to steady/smooth kit master in this roller coaster in just under six minutes.

Those who remember the era of the early 90’s when bands like Sadus, Epidemic, and Demolition Hammer gained traction will dig the angst, aggression, as well as killer timing/ songwriting capabilities present, beyond the obvious serious musical chops on hand (“Suspended in Agony” plus “Wretched Formations of Flesh” treasures in the display of death/thrash construction). Speaking of Demolition Hammer, the record closes with the band’s rendition of “Skull Fracturing Nightmare” off the crushing Epidemic of Violence album – proving that even if not gaining widespread acclaim in the 90’s, their presence has not been lost on the current generation of thrash/death musicians.

The sonic values adhere to that classic 90’s almost off the rails atmosphere – the performances certainly tight, but not to a point of spit shine polish as you’ll feel the grim, the dirt, the pain cutting through the flesh. Detherous may not necessarily be in the conversation of game-changing originators, but what they are able to do in this subset of death/thrash has to be heard, consumed, and heralded as this butchering won’t soon be forgotten.