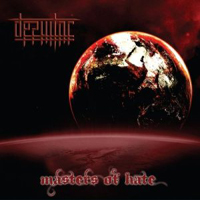 A beacon of light that shines through in the foggy haze that is the current retro death metal movement, Stockholm’s Desultor (go figure) have created a cacophonous maelstrom of DM madness on their Masters of Hate debut. Thrust up against dizzying guitar work, pounding, active drums, are of all things…clean vocals. It’s a combination that is mute in the death metal world, probably because few can figure out how to do it properly. Desultor certainly has, and it’s good enough to suggest that this is 2012’s best debut.

Comprised of guitarist/vocalist Markus Joha and drummer Michael Ibrahim, Desultor draws an instant comparison to A Celebration of Guilt-era Arsis, who at the time (2003) were a duo just like this. The parallels don’t end there, for Desultor has the same knack for savory melodies (see: “Denied”) and a similar technical fortitude, a defining trait that bolsters frenetic songs like the excellent “Another World” and whiplash-inducing “Division Insane,” one of the few songs that sees Joha employ a more hard-edged vocal style.

Joha is the make-or-break aspect of Masters of Hate. The Swede has a slight Warrel Dane-like curdle to his vocals, and if we really want to stretch things, comes across like a less-polished Oddleif Stensland of Communic. Regardless, Joha manages to plop his vocals down amidst a flurry of blinding riffs, most of which are well-suited for gurgles and grunts. Yet the man’s work on “And So We Bleed,” “The Luxury of Pain,” and “Caged” is natural-sounding and fluid, with nary a trace of sounding forced.

The progressive-minded who fawn over the essential works of Atheist, Cynic, and Death will easily find something to like about Desultor. Masters of Hate is multi-faceted and brims with enough versatility that any lateral moves out of the death metal realm should be rather effortless. In fact, calling this “death metal” might even be a reach. This could be the new age of progressive extreme metal…