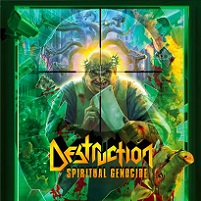 For those of you who don’t know, the German thrash metal juggernaut known as Destruction actually began life as Knight of Demon. Now can you imagine almost 30 years of playing at a fierce level of intensity and still going by that name? It just wouldn’t work, especially when you take into consideration the formulaic template displayed on Spiritual Genocide, and know that this being their 13th album was made with the die hard fan in mind.

For a band like Destruction though, they have been on a renewed headbanging mission ever since the release of The Anti-Christ back in 2001. What you get is beefed up guitars, great riffs and hooks, plus constant sing along choruses to boot. The casual listener might find this to be nothing more than rehashing the classic years, but as mentioned already, music of this nature is made for fans who wear their bullet belts and leather studs with pride.

In honor of maintaining this Teutonic wrecking machine for the past 30 years, Schmier and the gang have invited Sodom’s own Tom Angelripper, Gerre from Tankard and Ol Drake from Evile to help celebration the destructive proceedings. They even went so far as to extend a welcoming hand back to former members Harry Wilkens and Olly Kaiser to truly make this a special event. The outcome though is a thrash menagerie of savage riffing and speed metal intensity all built upon a muscular framework for the modern era.

Songs like “Cyanide” and “City of Doom” set-up the thrash-till-death attitude and the intense double bass drumming found on “Riot Squad” helps to cement the meaty viciousness in the remainder of the set. Again, there’s nothing terribly wrong with this release, just know Spiritual Genocide is a band doing what they do best, and that should put a smile on the face of the ardent thrash fan.