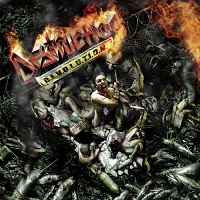 A fitting title given the state of the world, D.E.V.O.L.U.T.I.O.N. is the fifth post-reunion Destruction effort and succeeds where 2005’s Inventor of Evil fails. Naturally, the band’s razor-sharp, polished thrash attack is in place, as the crystal-clear tones and song-oriented nature that has come to define modern Destruction runs amok through this 10 song platter, each with a songtitle starting with a letter to coincide with the album title. Neato.

While vocalist/bassist Schirmer is still the band’s focal point, it is guitarist Mike Sifringer who carries the band. Sifringer’s potent, varied riffing has been a mainstay in Destruction’s template since their beginnings, but it is only with the last few albums (including last year’s killer Thrash Anthems compilation) where Sifringer’s noticeable guitar exploits have stuck out.

Destruction’s wide-open thrash assault has adapted well to the new millennium and instead of digging into the vaults for a re-hash of ideas, the band still sounds very fresh and relevant, especially on the grinding “V.icous Circle – The Seven Deadly Sins” and agile “U.rge (The Greed of Gain” which features guest appearances by Exodus’ Gary Holt and Annihilator’s Jeff Waters.

An added element of groove has seeped in, addinga much-needed flair on “L.ast Desperate Scream” and “T.he Violation of Morality.” Bonus points to Schirmer’s scathing lyrical slant as well, with the blonde bomber taking sideways shots at crooked politicians and the sad, sorry state of the world. ‘Tis a good thing to know thrash still has something to say.

Surprisingly, the cyclical nature of metal has kept Destruction relatively quiet on these shores, especially in comparison to Kreator, who usually swing by for a jaunt at least once a year. Then again, Destruction never quite equaled the status of Petrozza and co. in America, preferring the reign supreme in Europe. Nevertheless, D.E.V.O.L.U.T.I.O.N. may not top 2001’s gem Antichrist, but it’s the respected, commanding thrash that put Destruction on the map in the first place, only with some extra wisdom and vitriol slotted in for good measure.