Destroyers of All – Into the Fire (Self-Released) 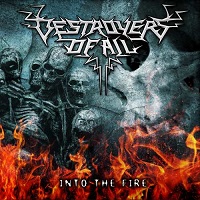 A bunch of fresh-faced newbies from Portugal, Destroyers of All try to cram essentially all of the 1990s into their six-song debut EP, Into the Fire. Metal of the 90’s variety generally entails rather blatant nods to the groove metal gang (Machine Head, Pantera, and Sepultura), and such is a happening here, but the five-piece make haste with techno death metal, extreme death metal, and even some black metal rasping. While not an exact time-capsule, it just shows the band hasn’t quite found their footing.

The production is strong for an unsigned band, so it becomes an afterthought as the zig-zagged “Soul Retrieval” starts to get moving, where full-on thrash has its day with technical solos (lots of arpeggios, sweeps), then is thrust into a helacious tech-portion which suitably, comes out of nowhere. This is the overriding pattern with Destroyers of All; they’re never happy with just one idea, so they give us 35 of them, a lot of which are good (nice grooves on “M4”), but aren’t left around long enough to make a lasting impression. These things happen when you’re two years-old. That, and temper tantrums.

The immaturity of Destroyers of All is quite evident, but expected. Few bands know what they’re doing two years into their existence anyway. They should be able to sort it out once they decide upon which style of 90’s is best suited for them. Here’s a suggestion: go with groove.