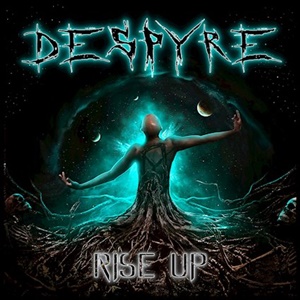 Absorbing the melting pot of influences across Long Island/Suffolk County in New York, Despyre formed in 2015 and immediately caught the attention of Life of Agony guitarist Joey Zampella, who recorded their debut EP Irritation. Immediately gaining prime support slot gigs locally for everyone from Death Angel to DevilDriver, The Agonist to Drowning Pool – they signed with Pavement Entertainment and have released their next full-length in Rise Up. Aiming to resurrect ‘pure metal’, there’s definite attitude and a steady supply of aggression and groove-oriented hooks throughout their material, sitting along an alt-metal terrain that has modern radio-oriented similarities as the current breadwinners still getting consistent commercial airplay.

Staccato-driven guitar parts, thumping/popping bass underpinnings, in the pocket drum tempos and fierce, barking/gang-oriented choruses are staples of the Despyre sound. The type of material designated for jumping, slamming energy for the musicians that will transfer to the audience and back again – it’s hard not to imagine sweating bodies grunting and pits forming to “DRU” or “Hell Freezes Over”, intertwining a bit of the street cred that put Biohazard on the map along with a healthy dose of Five Finger Death Punch and Disturbed. Street sounds, sirens, and car crashes signal the opening of “Liberate”, a mid-tempo anthem featuring a crunchy musical foundation as well as potent, penetrating verses, the delivery switching between fierce Anselmo-esque roars and comforting clean melodies a la Chuck Billy. For dynamic diversion you get some classical-laden piano parts during “Twisted”, while the closer “Blue Sky (Reborn)” is an acoustic-led affair featuring guest female vocals in a poignant, somber duet format.

After a few spins, there’s no question Despyre mean business and can slam home decent enough hooks and grooves – but it’s just not anything special to elevate their songwriting beyond what their main influences do so much better. And while giving a tip of the cap to Joey Z for covering Life Of Agony’s “Underground”, it’s not close to the same impact that the doom/crossover monster made for River Runs Red to become that blockbuster debut effort during the 1990’s – dragging a bit musically and vocally not even in the ballpark of Keith/Mina Caputo’s emotional capacities. Rise Up has meat and potatoes mechanics and songwriting, yet not elevating the groove/crossover metal game much to separate themselves from the pack.