Despair – Beyond All Reason (Divebomb Records) 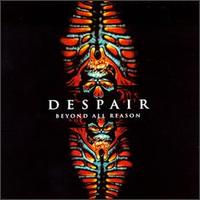 Often in the archives of metallic history, bands fall through the cracks for a bevy of reasons: inept promotions, improper label match ups, or ill-timing stylistically to what may be en vogue (the adjective for ‘in fashion’, not the R+B/“Never Gonna Get It” divas). Despair from Germany had a couple of musicians in its ranks known extensively for work outside of this act: original vocalist Robert Kampf would leave in 1989 to take over Century Media Records, while guitarist Waldemar Sorychta became a seasoned producer as well as being a part of Grip Inc. – but never quite made a blockbuster splash in the late 80’s and early 90’s when they released their three albums.

All the more reason for Divebomb Records to re-release the final studio album from this technical thrash/speed metal outfit, as Beyond All Reason originally hit the streets in 1992 when the underground devoured more death/extreme oriented acts, leaving a lot of more melodic-oriented musicians in the dust. The quintet lived for an advanced sense of racing guitar chord combinations with slight exotic twists – hedging bets that Waldemar and fellow axe slinger Marek Grzeszek took in a lot of Bay Area material from Testament and Forbidden as tracks like “The Day of Desperation” and “Burnt Out Souls” feature a lot of those maze-oriented runs and liftoffs that leave mouths agape in amazement. Drummer Markus Freiwald juggled the double bass steadiness and intricate off-time changes like a seasoned pro – “Deaf and Blind” gaining immediate kudos, even if the snare sound is not as sharp/ crisp in comparison to the superstars of the genre. When taking their foot off the accelerator, Despair could offer seasoned acoustic guitar parts and keyboard tension to make the mid-record “In the Deep” a 6:08 highlight, possibly stretching the band into Helstar/Queensÿche territory as the lead break and heavier transition give off a deeper, neo-classical affect.

Outside of being at the wrong place/wrong time musically (had this come out in the mid 1980’s it would have done a little better), the major deal breaker for most would have been the Teutonic melodic singing of Andreas Henschel. Part warble, part forced bellow, he couldn’t convince a lot of people to believe in tracks like “Rage in the Eyes” – plus the trailing vocal effects in “Son of the Wild” are old school tricks that would be laughed out of the studio today. At least he doesn’t reach for the out of place falsetto prevalent during that time period, so overall his performance on this record is satisfactory.

Collectors and metal historians will enjoy this most – for my money, their second album Decay of Humanity is the best document of Despair’s technical thrash excellence.