Obviously, we employ a points rating system at Blistering, something that was reintroduced to the site in September of 2008 after a multiple year layoff. People like numbers and statistics (ala Homer Simpson: “Oh, people can come up with statistics to prove anything. 14% of people know that.”), so it helps us (and you) gauge where albums either stand or fall. Unfortunately, there’s a girth of albums of the retro death metal variety that sound virtually identical to each other, which makes us ponder how to better utilize a scoring system.

The fact that Deserted Fear’s new My Empire is neck-and-neck withRevolting’s Ghastly Hymns of Horror is the impetus for this train of thought. Both bands share the same label (FDA Rekotz), are from the same country (Sweden), and have the same affinity for the three-headed Stockholm monster of Dismember, Entombed, and Grave. Thank goodness the label didn’t decide to do a split release for the two bands. That would have really complicated matters!

Deserted Fear does have Revolting beat in the production department, thanks in large part to Blistering favorite Dan Swano, who once again proves that his knob-twiddling skills can make anyone sound large and in charge. And the songs on My Empire are just, especially the steamrolling mid-section of “Morbid Infection” or the Incantation-like doom surge of “The Black Incantation” or the dastardly melodies presented on “Bury Your Dead,” which is an excellent closing number in line with Dismember’s classic “Dreaming in Red.”

All told, My Empire and Ghastly Hymns of Horror present the absolute finest in retro death metal circa 2012. They’ll suffer immensely because of the influx of bands doing the exact same thing, but at least that have each other to hold. Or not. Can’t see two Swedish death metal bands getting cuddly… 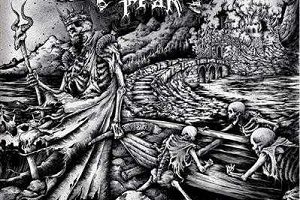