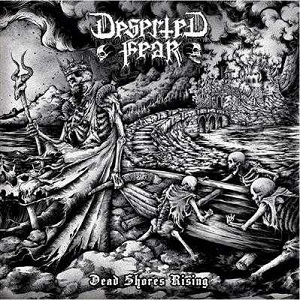 Clearly no longer motivated by sales numbers (or trends, for that matter), Century Media’s recent A&R practices resemble that of their early, seminal days. In the early’90s, the label was responsible for inking influential death metal combos such as Asphyx, Grave, Morgoth, and Tiamat (back when they were DM). Combining these bands with forward-thinkers such as Moonspell and Samael meant Century Media had a lineup stocked with bands with differentiating variables, thus ensuring the label’s success throughout the decade. The same applies today with the addition of traditional German death metal crew Deserted Fear, whose Dead Shores Rising represents a semi-throwback.

Part of the wave of fresh-faced, but classic death metal-inspired bands who came to be earlier in the 2010’s, Deserted Fear often captures the basic, but bruising template as so found in death metal of this vein, but look further, and there’s a semi-melodic angle that can’t be denied. This can be heard in the momentous speed-picking and harmonizing found on the excellent “The Edge of Insanity,” or the somewhat dreary power chord brushes on “Open Their Gates” (love the solo, too). The thread continues on album highlight “Towards Humanity,” which combines a Gothenburg-like surge through the wide-open corridors of chunky, but immediate death metal.

Whatever the level below brutal death is, Deserted Fear stands, and frankly, the band is better for it. Their songs have this quick, hook-first instinct that is often lacking in death metal of a similar nature. It all makes Dead Shores Rising Deserted Fear’s obvious entrance into greater visibility. It couldn’t have come at a better time…eyes are always on Century Media bands to begin with.