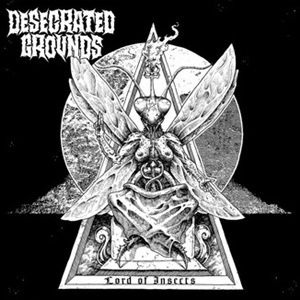 As complicated as the metal landscape seems with specific categorization and subsets within those categories, rest assured there are bands like Desecrated Grounds that prefer to keep it heavy and straightforward. Forming in 2014, they issued a four-song demo the following year before getting to work on this first full-length Lord of Insects. Hailing from the fertile metal breeding ground of Helsinki, Finland, the quintet appears intent on a death/thrash style that makes no apologizes for its ferocious and relentless nature – delivering nine songs of faster obliteration while occasionally serving up the necessary melodic reprieves to keep listener engagement.

You’ll often experience a pummel double bass/blasting nature to the rhythm section parts, while the guitar action switches up between thrash riffs with harmony possibilities and speedy death activities. It’s like taking the heavier action of Sepultura and pairing it with numerous European/American death influences of the straightforward brutal variety and that gives you insight into the Desecrated Grounds game plan. The thrusting and volleying of riff action and speed changes making “Stabwound Addict” a favorite, while the lower tremolo picking on the follow up “Sewing the Head Back” sure to appease the Morbid Angel/Cannibal Corpse hordes. When they choose to bust out the thrash aspects, the precise timing and stacking of guitars for “The Death in Me” are sure to stir up audience activity on the live front. As a vocalist Jussi Salminen has a discernible gravelly aspect to his voice – barking out the words while sending shivers during “Story Untold” and the rhythmic-driven closer “Valve” (‘let the cleansing begin/ roll out the napalm’ a classic line of the latter).

Nothing fancy in terms of the production and tones delivered – which keeps in line with the primal urgency that Desecrated Grounds considers most important. For those who tire of the experimentation of metal and want an album that remains resolute in death/thrash, Lord of Insects contains the necessary goods and songs to be a mainstay in your collection.