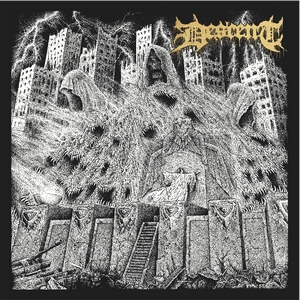 Falling directly in line with the growing mass that are taking the Entombed/Dismember crunch of the early ‘90s and applying it in a more punk/hardcore direction (a la Nails), Descent is the latest band to serve up abrasive slices of HM-2 with bouts of explosive grind. The Australian act is prone to destruction when it comes riff-time, but does it have anything to keep you coming back for more?

The answer is yes and no. The sometimes downright frantic sound that they deliver on Towers of Grandiosity is definitely enough to impress, as they lean into lethal doses of grind on “Skinwalker” and “Hindsight,” and the raw energy is palpable. The often blasting beats (and d-beats) are an adrenaline rush of the highest order – just listen to “Fountains of Sand” and not get sucked into the abyss. With the 23-minutes of playtime the album has, it doesn’t need to hold anything back either. Some slowdowns here and there keep it from being entirely one-dimensional in its carnage, but this is a record that is not about subtlety. So the piece that is lacking, despite the attempt at melody being there, is something to retain. There are a few moments, like the eerie interlude “Sicut Superius,” but it’s not injected enough into the actual songs themselves. There’s not enough moments that stick with you, other than the sheer intensity of the material itself.

That said, there’s plenty of throttling aggression to sink your teeth into on Towers of Grandiosity. Memorability is a little sacrificed because of it, but the feral nature of Descent makes it worth an investigation or two to see if you are a part of their target audience.