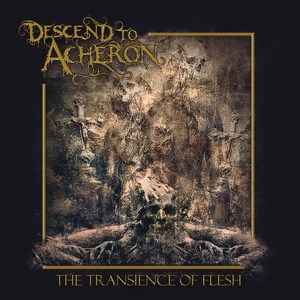 A new brutal death metal act from Australia, Descend to Acheron bring forth their first release with The Transience of Flesh. First and foremost, this release is intent on giving the listener a bludgeoning from beginning to end, as any enjoyable death metal release should. But some slight progressive tweaks also keep it a more interesting journey.

Given the EP length, there’s never a worry about the band going too heavy and getting fatigue from the perpetual bombardment of fast riffs and pounding drums. The visceral edge of the band does have a reminiscence to the elder statesmen of the ‘90s, with that urgent and punishing sound that early Deicide, Immolation, and Suffocation enjoyed coming into light readily. Each track is essentially a barnburner in that regard, moving quickly ahead with speedy tempos and attacking riffs doing their best to keep the adrenaline rush going. Deep, bellowing growls and raspy screams are par for the course, but the lows in particular stand out in their upfront heaviness and give an extra notch to the intensity. Despite the battering ram mentality, a few things on the progressive end do stand out. Outside of some nice tempo change-ups into groovy stuff, some of the basswork sticks out for the style at times (“The Godless Part I”), with a nod towards the more modern tech scene, and the solos/leads can display a melodic flair that serves as a nice counterbalance to the otherwise frenetic assault (see “Plague of Superstition”).

The Transience of Flesh is a death metal rager, pure and simple. For a first release, there’s a lot of promise for those hip to the scene. The merging of some lighter prog influences and frequent tempo shifts into an otherwise oppressive battering of death metal keeps it more intriguing overall. Hopefully we’ll hear some more from this act soon.